Sunrise above my head,
That sweet sound of yours,
Your deep voice;
be gone.

Shut yourself down through my own heart.
Disappeared.
Down.
Deep.

We were apart
Yet we are

You are a person prone to bouts of real self-examination. This is in sharp contrast to a striking ability you have developed to appear socially very engaged, even the life and soul of the party; but in a way that only convinces others. You are all too aware of it being a facade.

You will often be at a gathering and find yourself playing a part. While on the one hand you'll be talkative and funny, you'll be detaching yourself to the point where you will find yourself watching everything going on around you and feeling utterly unable to engage. You'll play conversations back to yourself in your head and wonder what that person really meant when he said such-and-such - conversations that other people wouldn't give a second thought to.

How have you learned to deal with this conflict? Though exercising control. You like to show a calm, self-assured, fluid kind of stability (but because this is self-consciously created, it will create bouts of frustrated silliness and a delight in extremes, or at least a delight in being seen to be extreme). You most easily recognize this control in how you are with people around you. You have learned to protect yourself by keeping people at bay. Because in the past you have learned to be disappointed by people (and because there were issues with you adjusting to your sexuality), you instinctively keep people at arms' length, until you decide they are to be allowed over that magic line into your group of close friends. However, once across that line, the problem is that an emotional dependency kicks in which leaves you feeling very hurt or rejected if it appears that they have betrayed that status.

Because you are prone to self-examination, you will be aware of these traits. However, you are unusually able to examine even that self-examination, which means that you have become concerned about what the real you is. You have become all too aware of facades, of sides of yourself which you present to the world, and you wonder if you have lost touch with the real and spontaneous you.

You are very creative, and have tried different avenues to utilize that ability. It may not be that you specifically, say, paint; it may be that your creativity shows itself in more subtle ways, but you will certainly find yourself having vivid and well-formed ideas which others will find hard to grasp. You set high standards for yourself, though, and in many ways are a bit of a perfectionist. The problem is, though, that it means you often don't get stuff done, because you are frustrated by the idea of mediocrity and are wearied by the idea of starting something afresh. However, once your brain is engaged you'll find yourself sailing. Very likely this will lead to you having considered writing a novel or some such, but a fear that you won't be able to achieve quite what you want stops you from getting on with it. But you have a real vision for things, which others fall short of. Particularly in your work situation, you are currently fighting against restraints upon your desire to express yourself freely.

Partly this is because there are ways in which you have been made to feel isolated from certain groups in the past - something of an outsider. Now what is happening is that you are taking that outsider role and defending it to the point of consciously avoiding creative and work pursuits. You have an enormous cynicism towards those who prefer to be part of a group or who exhibit any cliquey behavior, and you always feel a pang of disappointment when you see your 'close' friends seeming to follow that route. Deep down it feels like rejection.

For all that introspection, you have developed a sensational, dry sense of humour that makes connections quickly and wittily and will leave you making jokes that go right over the heads of others. You delight in it so much that you'll often rehearse jokes or amusing voices to understand yourself in order to 'spontaneously' impress others with them. But this is a healthy desire to impress, and although you hate catching yourself at it, it's nothing to be so worried about.

You're naturally a little disorganized. A look around your living space would likely show a box of photos, unorganized into albums, out-of-date medicines, broken items not thrown out, and notes to yourself significantly out of date. Something related to this is that you tend to lack motivation. Because you're resourceful and talented enough to be pretty successful when you put your mind to things, this encourages you to procrastinate and put them off. Equally, you've given up dreams a little easily when your mind flitted elsewhere. There are signs of an excursion into playing a musical instrument, which you have since abandoned, or are finding yourself less interested in. You have a real capacity for deciding that such-and-such a thing (or so-and-so a person) will be the be all and end all of everything and be with you for ever. But you'd rather try and fail, and swing from one extreme to the other, than settle for the little that you see others content with.

Conclusion: You present something of a conundrum, which won't surprise you. You are certainly bright, but unusually open to life's possibiliites - something not normally found among achieving people. You would do well to be less self-absorbed, as it tends to distance you a little, and to relinquish some of the control you exercise when you present that stylized version of yourself to others. You could let people in a little more.

You gave me hope, you let me dream
Made me believe I can still trust

You raised me up, you gave me wings
Just like a kite in the sky

~Sami Yusuf
Posted by Ummu Najla at 15:52 No comments:

Email ThisBlogThis!Share to TwitterShare to FacebookShare to Pinterest
Labels Lagu/Song

Quote of The Day 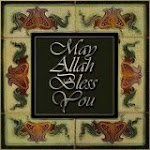